The NewSpace mapping of China Aerospace Blog has just been updated (June 2019 edition), adding 32 more startups to the landscape.

Just as the previous edition, are included in the mapping the following companies:

As usual, are excluded the usual large state-owned corporations (CASC, CASIC, China Academy of Sciences) and their subsidiaries.

Which companies have been added?

A majority of the added players are newer or more low-key space startups, as well as some ground segment players initially considered as not notable enough to be included (typically some VSAT antenna manufacturers).

Some data crunching on these startups

The significant increase in the number of startups on the map is a great opportunity to repeat the data analysis, done last year on a much smaller sample. 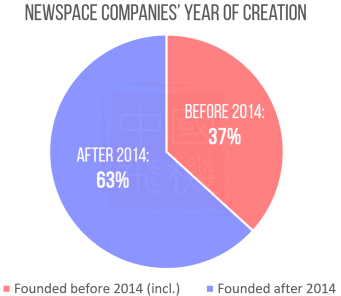 From above, the effect of the “opening up” policy regarding space and entrepreneurship is obvious: literally two in every three NewSpace players were founded in 2015 or after.

It is also worth noting that the creation of startups has actually grown more dynamic every passing year between 2014 and 2017. This is probably due to the increasing support brought by government policy and state-owned space players during those 3 years. The drop in 2018 may be due to the fact that startups founded less than a year or so ago haven’t started communicating yet and are staying very low key. Another reason could be that most areas of the value chain have increasingly been covered. The currently startup landscape is already highly impressive, and many space watchers are hinting at an upcoming overheating and consolidation phase.

Fig. 4 – Block Chart of the Headquarter Locations of the 87 NewSpace Companies

A close-up at the headquarters of the sample of 87 companies shows that Beijing, unsurprisingly, remains the stronghold of Chinese NewSpace, while some interesting activity is building up in some alternative cities (Xi’An, Shanghai, Changsha, Wuhan).

Note: the image featured at the beginning of the blog post is the lift-off of Tianxing-1, small reusable launcher under development by Space Transportation (凌空天行).