Chinese space has been a very hot topic in recent years. Other than the impressive space exploration missions (Tiangong, Chang’e…), the interest for China is also due to the recent opening up of this industry to private investments, which has led to a leap in the number of space start-ups. These start-ups, supported by venture capital heavy-weights are covering the entire space industrial chain: launchers, satellite platforms, satellite subsystems, satellite services, ground segment, etc.

The number of space start-ups on the other hand, is a debated question. Chen Lan estimated in November 2018 that there were over 100 Chinese space start-ups [1]. FutureAerospace, a Beijing-based think-tank, sets the number at around 60, at the same period [2]. Other space watchers have suggested 80 such as in [3]. However, how this count is made is rarely detailed (how do we define a “NewSpace company”?), and very few lists are available at the time of writing, if any. Up to now, only Disrupt Space, a start-up which plans to build a global space entrepreneurial community, has undertaken the establishment of a list, which sets the count at 35 Chinese space start-ups (see map below). 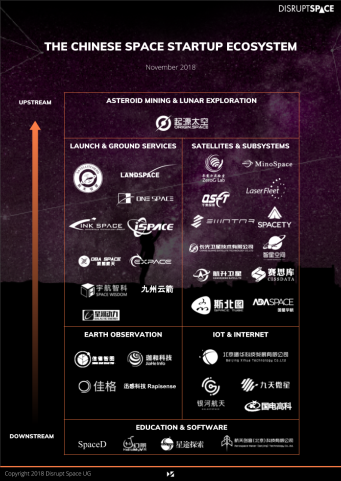 Unfortunately, these figures don’t seem to corroborate. This probably due to the unclear definition of “NewSpace company”: different definitions can include or exclude multiple companies, leading to these figure discrepancies. Another reason is that quite a few Chinese space start-ups act in a stealthy way (no websites, few interviews, don’t always have a WeChat Official Account). This makes any Chinese NewSpace list hard to establish.

This article aims at giving a more thorough count of Chinese NewSpace players, by defining the criteria used to consider a company as a “NewSpace company”, and by arranging them into a map based on their role in the space industrial chain (for this, we will base our map structure on the Euroconsult Space Value Chain model, available in [5]).

In both cases, space consultancies and space education start-ups (VR, …) are considered irrelevant and not included in the mapping.

This blog post only presents the General Mapping, as the Constraint Mapping is currently under construction. The maps will be updated on a regular basis in the Space Industry Infographics section of China Aerospace Blog.

As a final note, please let me know if there is a company I have missed or if you believe one of the players on the map don’t belong there. Get in touch at hello@china-aerospace.blog.