This blog post aims at giving an in-depth review of the Chinese airline industry, within the “Industry Overview” article series. It covers the historical background of Chinese civil aviation and draws a portrait of current airline landscape dynamics. A second article will follow on Chinese airline fleets and alliances.

The Airline Industry in China: a History

Excluding the pre-1949 Republican era, the development of the airline industry in China is commonly divided into 5 periods. Based on some past authoritative papers such as [1] and [2], they will be named in this blog post :

Before 1978, China had a tightly regulated airline industry, modeled on the Soviet Union. This essentially meant that the CAAC (Civil Aviation Administration of China), which operated under the government and in a close relationship with the military, controlled all of air transportation. This included flight operations, airport planification & management, air traffic control, and flight regulations. As such, there were no airlines as we know them today (Air China, China Eastern, etc.), all flights were run by a division of the CAAC, called CAAC Airlines, which was a state monopoly (see Fig. 1 and 2).

Following the opening-up policies of China in 1978, measures were taken to reform the inefficiencies and conflict of interest. CAAC was separated from military control, and split up the management of airlines, airports and air traffic. Running airlines was turned into a profit-driven business*. Airlines were allowed to be set up in partnership with local governments and the private sector (such as Xiamen Airlines in 1984, Shanghai Airlines, Xinjiang Airlines in 1985, and Sichuan Airlines in 1986). The CAAC, however, remained both regulator and operator of the air transport industry (including airports, the majority of airlines, & air transport services). 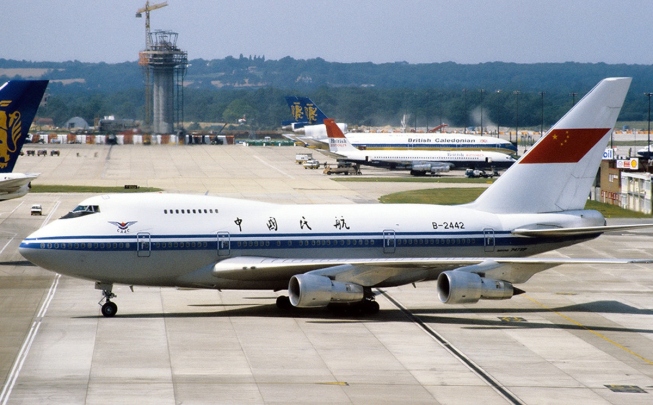 *Under the former Soviet-style economy, state-owned companies would turn in all income to the central government, which in turn could redistribute it to other SoEs. This is still true to some extent for a small number of state-owned companies considered as “strategic” and supervised by the special commission SASAC (State-owned Assets Supervision and Administration Commission) [3].

During 1987-1988, CAAC Airlines was finally split into 6 completing airlines: Air China, China Eastern, China Southern, China Northwest (based in Xi’an, now part of China Eastern in 2002), China Southwest (based in Chengdu, merged with Air China in 2002),  and China Northern (based in Shenyang, merged with China Southern in 2003). In 1994, foreign capital was allowed into airlines and airports (although with strong restrictions). Many new airlines were introduced, with a mix of private, foreign, and municipal capital, among which the soon-to-be giant Hainan Airlines (1993). Airfare deregulation was introduced in 1997, in order to increase competition and enhance efficiency within airlines. An “Airport Localization” plan was launched in 2004, transferring ownership and management of all airports (except Beijing and Tibet) to local governments [5].

In 1997, the Asian Financial Crisis hit Chinese airlines hard, fragilizing many due to lower demand, rising competition due to the increased number of airlines, and high debt ratios. In order to consolidate the sector, the CAAC encouraged a series of mergers which would significantly reduce the number of airlines: 21 in 1994 vs 10 in 2004 [1]. This triggered the emergence of the “Big Four”, namely Air China, China Eastern, China Southern, HNA Group. Interestingly, unlike the other “Big Four”, HNA Group (which owns Hainan Airlines) is not state-owned, but is rather a mix of private and municipal capital (including at one point significant stakes in Hainan Airlines from George Soros). [4]

In 2004, the CAAC released the Scheme of Domestic Airfare Reform, relaxing airfare regulations by enabling airlines to increase or decrease ticket prices by 25% and 45% respectively [7].  The same year, the CAAC promulgated Regulation on Domestic Investment on Civil Aviation, de facto opening air transport to private capital and enabling the creation of 100% private airlines. Soon after, the first wave of private airlines started operating: 10 in just 2005 alone, and a good 20 by 2007. A significant number of these airlines were jointly founded by local governments (eager to develop flights regionally) and the “Big Four” [1]. However, many of the newly-founded companies quickly started to suffer financially due to mismanagement and/or the effects of the 2008 Financial Crisis [5].

In 2006, Regulation on Operation of Chinese Civil Aviation Domestic Routes and Flights was promulgated, making the entrance or exit of a route easier for airlines and triggered a move from the larger airlines to expand their geographic network. Combined with the exacerbated competition in certain major hubs of the Eastern provinces of China [5], this led to a series of market-driven consolidations in the Chinese airline landscape (as opposed to the state-led consolidations in 1997). This meant the bankruptcy of certain newly established airlines, the take-over of others by the “Big Four”, including some of the earlier bigger airlines (Air China’s stake in Shenzhen Airlines in 2010, China Eastern’s acquisition of Shanghai Airlines in 2011) [1][5].

As the number of airlines skyrocketed, the CAAC reacted by reducing its rate of approval of new airlines in 2007-2010, and prolonged the policy until 2013 over safety concerns (crash of Henan Airlines flight VD8387 in 2010). Some of the more successful and fully private airlines created during this period include Juneyao Airlines, Spring Airlines, and Okay Air.

Further liberalization occurred in 2013. All airfare regulations concerning price minimum were further relaxed on 31 routes [7], a strong incentive for the Low-Cost Carrier (LCC) model, and also a way to enable airlines to compete with China’s new high-speed rail network [5][6]. In 2015 and again in early 2018, the CAAC further eased airfare regulations, this time at the other end: enabling airlines to increase ticket prices. This was seen as a move to strengthen and increase the profitability of the “Big Four”, although price deregulation (including increases) is also at the core of the LCC model. The deregulation concerned 101 domestic routes in 2015 [8], and 306 highly competitive domestic routes in 2018 [9]. Deregulation of international routes was also initiated in 2018, relaxing the “one route, one airline” policy from 2009. This enabled more competition between Chinese carriers, which were essentially restricted to their home base for international flights (Air China, for example, had priority for international flights in Beijing), as well as enabling new private companies to enter the competition [8][10][12].

At the same time, the CAAC also enabled the approval of a second wave of private airlines. Many were once again funded and supported by municipal governments and “Big Four” airlines [6], such as Qingdao Airlines and Urumqi Airlines. Others were purely independent airlines such as Donghai, Loong or Ruili Airlines. Approximately 20 new airlines were in service or waiting to be approved at the end of 2014. While the opening up of air transport to new airlines was largely seen as a move by CAAC to favor the entrance of LCC carriers, most of the new airlines are “full-service” airlines [13].

Many experts remain convinced that the LCC model has a strong potential in China, due to the extreme price-sensitivity of the air transport market and the quasi non-existence of airline-loyalty [13][14].

Despite the emergence of new private airlines, China is not exactly what one would call a competitive market. Although the number of airlines is significant (40+ in 2019), a good 30 are part of the “Big Four” airlines. The level of competition, measured by [1], is actually estimated to be roughly the same between 1994 and 2012. Although most air routes and airports have become less monopolistic or duopolistic (presence of 3, 4, 5 or more airlines flying a given route), the “Big Four”, historically dominant in the Eastern regions where most of the big hubs are, have increased their presence on these high-frequency profitable lines over the last 20 years.

Although opening up air travel to new airlines and the LCC business-model has been clearly identified as leverage for further development of air travel, the CAAC today remains mindful of protecting the state-owned “Big Three”, especially with regards to international competition.

China’s air travel industry has gone through tremendous lengths of reform over the past 40 years. It has grown away from its former Soviet-style administration by separating regulators and flight/airport/services operators; it has split the government monopoly to create a (seemingly) competitive landscape enabling higher efficiency; it has deregulated significantly (airfares, routes, private capital, …) all the while advancing cautiously in order to protect its “Big Three” state-owned giants. The success of Chinese air travel policies is undeniable when one looks at the exponential growth of domestic air travel and the relatively high level of safety of Chinese airlines. The success of Chinese policies can also be measured in comparison with those of other emerging economies such as Brazil and India [1]. Of course, China is also facing its own problems, such as heavily congested airports and air space, as well as frequent flight delays.

Despite the many aforementioned reforms undertaken by the CAAC, China’s airline industry remains what one would call a “state-led” deregulated market, as opposed to the market-led deregulation in the United States and European Union. Airfares are still subject to some form of price control on many routes as of 2019. Authorizations to set up an airline by the CAAC remain highly political. They can be linked for example to “if an airline business plan supports the government policy of providing transportation to rural areas” [15], or to the number of orders of Chinese-manufactured aircraft (COMAC ARJ21 or C919).

Municipal subsidies pouring into local airlines are also influencing the air travel network, especially in second-tier cities eager to develop international routes or to densify domestic ones. Fuzhou, for example, offers 300 000 RMB per flight to any new routes to most North American destinations as of early 2019 [16].

Be sure to check out Part II on Chinese airline fleets and alliances next month!