I sometimes read in (non-specialized) media that the C919 single-aisle aircraft currently under development by Chinese manufacturer COMAC is just an “empty shell”. The idea conveyed here is “since most aircraft systems come from foreign companies, it means that China doesn’t get the credit for building the aircraft”. In a nutshell, they are saying that the C919 “isn’t really Chinese”. I actually sometimes get that from Chinese discussions as well (“C919只是一个空壳”). When this happens, the press/people usually throw (a variant of) this image at the reader:

While this may be true, using this diagram as proof is a mistake in logical reasoning: an example isn’t sufficient to demonstrate a general rule. If I meet 10 kids, from a school, that happen to be from the US, it doesn’t mean the whole school is attended by North American kids. In other words, digging up the nationality of a handful of C919 suppliers (which all happen to be foreign) isn’t enough to prove that the C919 is mostly a foreign plane.

Let’s put some science into this.  Let’s have a rigorous, factual approach to this question, regarding the COMAC C919, but also its direct competitors the Airbus A320 and the Boeing 737. Before we begin, the methodology is detailed below.

I have conducted the following experiment: recently I have had access to one of those big consulting firm databases, from which I extracted useful aeronautical data. I took the supplier list of all three aircraft: the Airbus A320, Boeing B737, and COMAC C919 (henceforth called “A320”, “B737” and “C919”). From each list, I have extracted the suppliers and traced the company’s country to see the representativeness of foreign and domestic players. I then correlated the foreign/domestic nature of each company to the category of parts they provide (avionics/airframe/aircraft interiors …) and drew further conclusions.

Of course, there are limits to this methodology, regarding the reliability of the data (notably for the C919 data). Please read up the limits at the end of the article.* 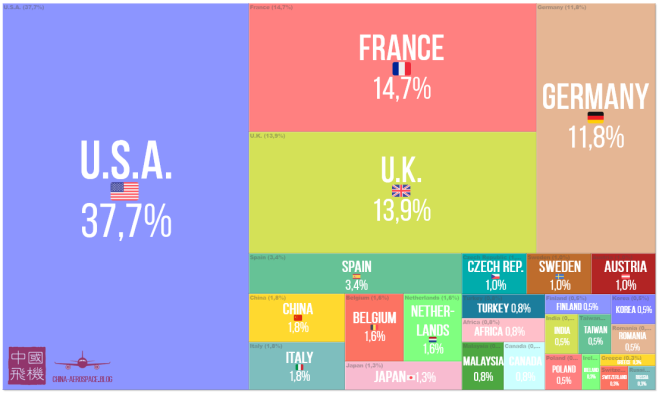 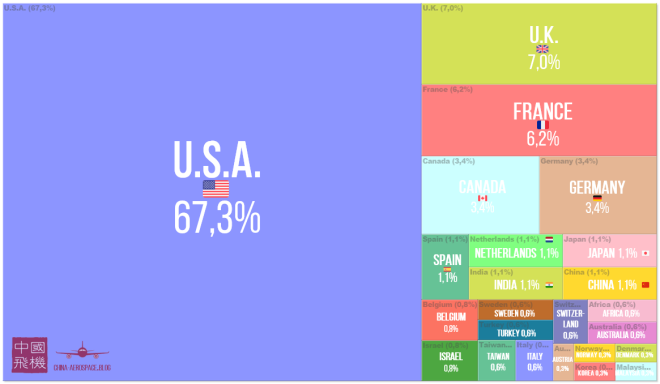 The B737 sees an overwhelming representation of US suppliers, snatching two-thirds of the aircraft’s suppliers. We can also notice that the following order of countries after the US is the same: France, Germany, UK, thus accrediting the significance of the aerospace supply chain in these countries. Canada also stands out, being on par with Germany (3,4% each). All other countries are at 1% or lower. 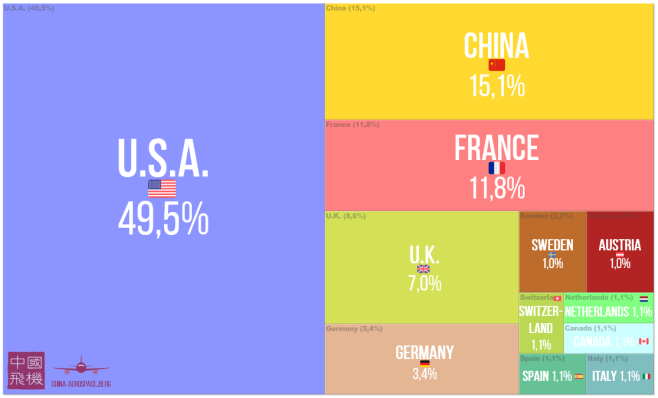 The C919 is somewhat in between the A320 and B737: strong US suppliers (approx. 50%), but with an importance of France/Germany/UK (adding up to 20%). The biggest difference lies however with the very striking presence of China, representing 15,1% and thus taking hold of 2nd place as supplying country. This is also an expected result, as COMAC (whose ownership can be traced to the government) has explicitly pushed forward domestic suppliers or Sino-foreign joint-ventures (JVs) [1].

The number of domestic suppliers

Another interesting point to focus on is the number of suppliers from the “domestic country”. That would be the USA for the B737, China for the C919, and France/Germany/U.K./Spain for the A320, as Airbus can be considered as essentially a British-French-German-Spanish venture.

What information can we get from these pie charts? Firstly, that the aircraft manufacturing market is highly international: all 3 aircraft see a strong representation of foreign suppliers in their supply chain (ranging from 33% to 85%).
Secondly, that politics and historical factors play a role. For each aircraft, there is a much stronger representation of domestic players: for the C919 (as mentioned before), but also for the B737 and A320, which were launched in the 1960s and 1980s, at a time where politics played a stronger role in the supply chain of aerospace programs. This may be less true today for Airbus and Boeing, which have strongly internationalized their supply chain since, as would probably illustrate a study of the more recent A350 and B787 supply chain.
Also, these pie charts combined with the previous block charts enforce the idea of US supremacy in aircraft manufacturing, as all non-US aircraft see  US suppliers representing at least 1/3 of the supply chain, and consistently being the n°1 country in providing aircraft parts. 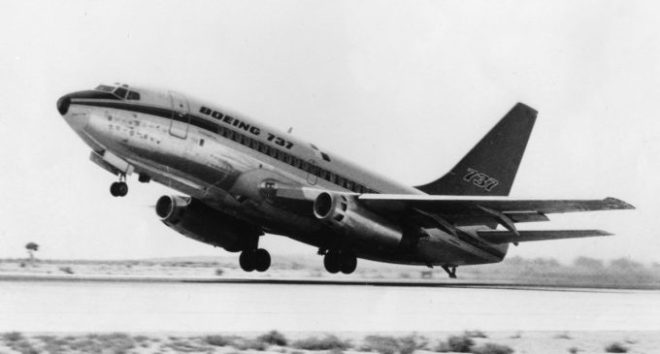 When you assemble all of this data with names and locations onto a map, this is what it looks like (see below). A big thanks to my friend and data mastermind Arttu Säynäjäkangas for putting this map together with Plot.ly. 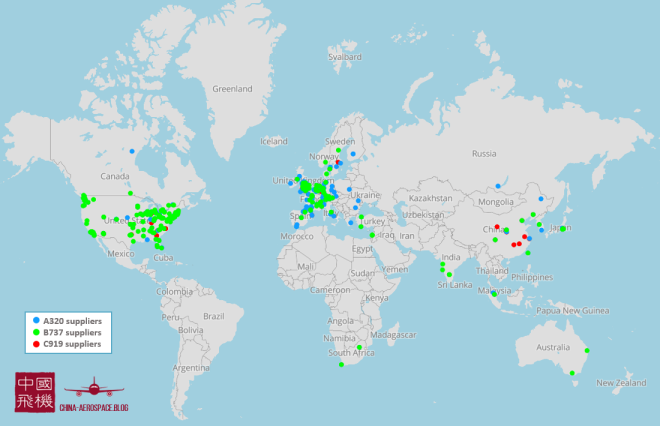 I’ll write a part (2/2) of this article to correlate each supplier with the added value of the parts manufactured, as to correct the representativeness of each company (small non-critical structural parts, for example, should have a lower coefficient of representativeness than say the landing gear manufacturer). This will also make visible the specialization of each country in aircraft parts (aerostructure, control systems, avionics, …).

Hope you found this read useful, until next time!

Notes:
*limits of the methodology: each supplier is considered of equal importance, therefore putting on equal footing landing gear, harness, avionics and winglet manufacturers (among others). A part (2/2) of this blog post will attempt to correct this by correlating each supplier with their importance.
Another limit consists of the number of suppliers for each aircraft, especially for the COMAC C919. Are most/all suppliers present in the database? For the A320 and B737 this is most likely the case, considering the number of suppliers present in the database for each aircraft. There are significantly fewer suppliers listed for the C919 (3 times less), but still enough to deem likely that most tier-1 and tier-2 suppliers are included. But this difference between the C919 and the two other aircraft is another factor that could add a discrepancy in the results.